Spring May Come, Or, When Good Dogs Photobomb 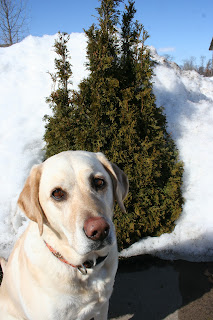 The snow is beginning to recede, and as it receded today, it opened up a patch of dirt near the driveway where I have a bunch of crocuses in.  So I thought I'd take a picture of the crocuses to celebrate.  But I'm dogsitting the neighbor's dog, and she decided that if there's a picture being taken, it should be of her.  You can get an idea that there's still plenty of snow on the ground (there's a drift behind her from where I put snow I dig off the driveway, so it looks higher than it mostly is). 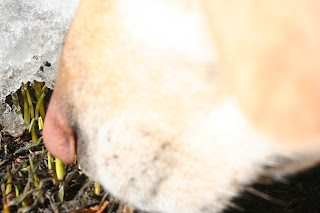 She's very curious about what I found so exciting. 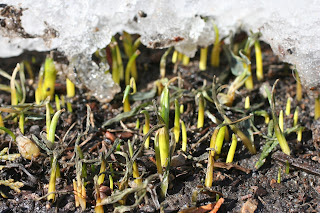 You can see here that the crocuses are coming up!  There's still snow to melt, but this looks like spring may really be on the way!  Get up those stairs, Persephone!
Posted by Bardiac at 2:58 PM