Week 52/66: Working at the Library and Playing in London

What a busy time it's been!  Since I last wrote, I had a lovely visit with my cousin's daughter, M, who's studying at St. Andrew's.  (M is A's sister, the ballet dancer I visited in Pittsburgh.)  First, like A, M is wonderful.  Gosh, my cousins have been doing a great job raising kids!  M is kind and nice, also smart, feminist, and fun!

M got here in the mid-afternoon Saturday, to King's Cross, and I showed her the British Library first.  Then off to our hotel.  We had a few minutes in the British Museum (before it closed) and then went and saw The Play that Goes Wrong together, and enjoyed that.  The next morning, we went to see the changing of the guard along with a couple thousand of our closest friends.  I didn't see much, but I hope that M, being a tad taller and nearer, was able to see a bit more.  We walked from there to Horse Guards Parade, which was closed for a service (but saw a band march by), and then on to the Tower!  As usual, the Tower was fun.  We spent most of the day there, and then went over the Thames to Southwark, had dinner, and went to see Pericles.

Pericles was very good.  They played it with a cast of 8, which necessitated some cutting (They cut the "read aloud the shield things" for example).  But the energy was good, the audience reactive, and the played moved well.  I thought they did an especially good job with the Antiochus/incest part, and with Pericles communicating his fears about Simonides.

In the age of "Me, too," I was worried that the prostitution part, or the "Marina's too pure to be prostituted" part would feel flat, but it didn't.  Marina was just great at playing that seriously, but not innocently.  She was really good.

On Tuesday, back to the Library, except I left early to see a matinee of 12th Night.  This was played by the same 8 person cast that played Pericles, and again, the small cast necessitated some cuts (which I noticed more because I've taught it a fair bit.)  It was very good!  They cross-gender cast the four romantic roles, but not Malvolio or Antonio.  Feste was super.

I walked and ate at The George in Southwark, which is supposed to be one of the oldest staging pubs in London.  The food was okay, the ambience okay... 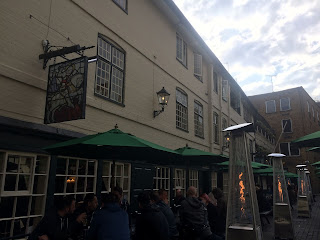 I have to admit that I like the uneven stuff you sometimes see with older buildings.

That night, I went to see 1 Henry IV, played by the same cast that had played H5, except with a much fuller house, on a nicer evening, and voila, much more energetic performance.  They did the fighting mostly by waving around flags, which I thought worked pretty darned well.  Hotspur was outstanding.  Hal only slightly less so.  Falstaff didn't do much for me.  A woman played the role, but I don't think that was it.  I'm not sure...

On Wednesday, I spent an almost full day at the Library, but then went to 2H4,  and it was a drizzly feeling evening (I don't think it actually drizzled, but if felt like it might), cool, and the crowd was VERY thin (and got thinner after the intermission).  And the play just felt flat.  Hal was very good in the crown scene, but Falstaff wore on me.  H4 was good throughout.  It might be that the play just has never worked as well for me as part 1.

The rest of the week was, predictably, Library time!  And a very good time it was!

I read about this travel narrative by Gerrit de Veer about the exploration voyages of William Barents (1594, 1595, 1596), and read that the Winter's Tale bear eating bit might have been inspired by an image there:  (Sorry to be sideways; I've tried to correct it.)  (Notice the Paddleboarders in the mid-ground!) 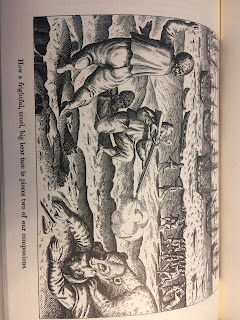 This picture is from the 1853 edition.  But I've looked at the 1609 edition, and there aren't any images, certainly not this fabulous bear eating the guy's head.  I haven't been able to figure out where the image came from, or if it's later (as I suspect) and thus couldn't have inspired Shakespeare.

I've been falling into two holes, good ones, I think, one about the bears, and one about arts and such, which I think is actually way more fruitful right now.  I was reading Henry Peacham's Graphice, from 1609, and found some fun additions: 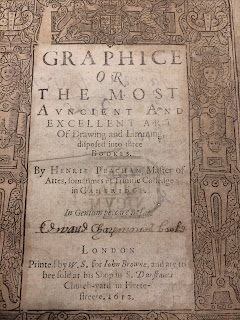 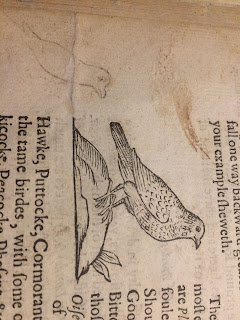 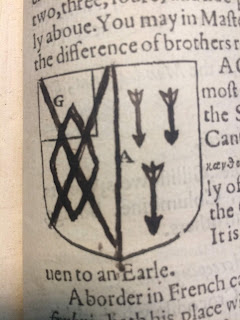 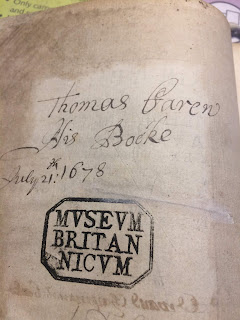 The date of 1678 make this too late for the poet Thomas Carew, but there's a lawyer of that name on Wikipedia active at that time, who died a couple of years later.  I have no idea who the shield thing belongs to, but if anyone has thoughts, I'd love to learn!