In the Blink of an Eye, a Week Goes By

It's been a week, very quick.  I feel as if I've gotten nothing done, but of course, I did.

I worked through the parts of two history books I wanted to read to understand early modern slavery practices in Western Europe and the Americas.  Horrifying, as you'd expect.

I got frustrated enough with the ice forming inside at the edges of some windows to take action.  I started out using painters' tape and bubble wrap.  But then I went to the home improvement type store and bought kits and insulating tape, took off the bubble wrap and painters' tape, and taped up areas, and put plastic sheets over some windows.  There's a noticeable difference in the house, especially in my bedroom (the window in my bathroom was bad, and the sliding glass door, just as bad.  Now it's pretty darned good.  And the red room, which is the TV room.  It's a problematic room anyway, because it was built as a conversion from a second story deck; underneath is enclosed, but not heated.  It's got a tile floor, and six big windows, basically the three exterior walls are mostly windows, and they're sliding windows, which tend not to be really airtight, anyway.  (In summer, it's a delightful space, and it's got great light in winter, and is lovely for watching birds on the deck.)  It's still not exactly toasty, but at least there's not a breeze now!

I should have done this years ago.  The good thing is, I'll have a good idea where to put more caulk, and will put plastic sheeting up much earlier in the future.

Here's a housing question: from the way all the plastic sheets bow in slightly, like sails with a bit of wind, it looks like the air pressure inside the house is less than the air pressure outside.  Why is that?  (Wouldn't it even out very quickly from doors opening and closing?  Wouldn't the warmer air inside tend to make it higher pressure inside?)

I should post more about practicing violin because it's really fun and interesting.  I've learned a lot.


Second, I like scales.  I was having trouble thinking of a note when I played it, which was making playing certain things more difficult (like, you see an F, where do you put your finger, especially if you're not coming from an adjacent note).  So I found a chart on-line, and printed it out and filled it in.  It's in two parts, the sharp scales and the flat scales.  I filled in all the notes, and they're in order.  Now the cool thing with these is that each scale starts a fifth from where the last scale started; the sharps start a fifth up, and the flats a fifth down.

So on my chart, I start with a C scale (a weird one on the violin), and then move up a fifth to the G scale, adding one sharp, and so on.  And since the violin strings are a fifth from each other, it's relatively easy once you get the concept to follow on.  I practice either the sharps or flats every day, with broken thirds. 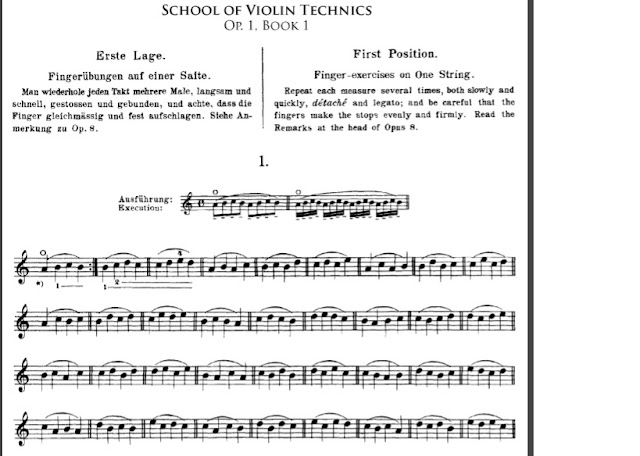 And then, once you can do these individual measures (at different speeds), you play them more, and then you get to this (same source, different screen capture technique):

And that's just the first page.  There are more to come.  The thing is, I may be able to play the quarter note version with one bow (since these are slurred), but unless my fingers move pretty fast, I run out of bow before I finish the eight note version.  I'm getting way better, but I'm still on the first page.  (I think I started working on Ševčík in mid-summer.

Again, this is part of trusting the process.  There's no way to teach your fingers to play the violin without doing lots of playing.  If you do structured exercises (Suzuki, the Ševčík, etc), then you're trusting that a lot of smart people have spent a lot of time and found these effective.  You're not going to get some magical moment where you pick up the violin and ta da, you just whip off a concerto.  At least, I'm not.  (If you're good, of course, then you can make it look like ta da, but people aren't seeing the hours of practice, just the result.)


Four, I like the Suzuki music choices.  I already feel like I'm playing real music, little bits, sometimes simplified, but real.  I'm working on a piece by Lully, another by Beethoven, and another by Boccherini (the minuet).  But they're also really hard (for me), and I need to memorize them and play them well.  So, you know, I need to go practice.


Strings is away for break, and we talked before she left about my goals for break.  In addition to working on my pieces, I'm focusing on dynamics (playing louder or softer is so hard) and on bowing (using the full bow, which I tend not to do when I'm learning a piece, and then have to rework everything, but it sounds so much better when I use a fuller bow!).