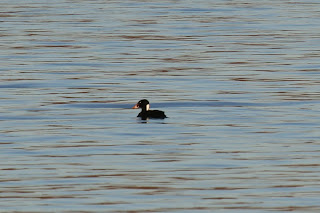 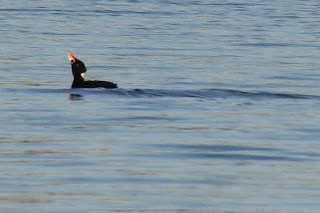 Surf Scoters are pretty rare up in the North Woods.  They're way more common in the way up North.

But there's been one nearby, so I went out after work on Friday, drove a bit, and got to see it.  (And took a couple of pictures; these are cropped, and not nearly as good as pros take, but enough to remind me.)

Pretty exciting.  It's so very cool that there are email lists and such that people use to share information about bird sitings and such.  (I'm sure there are lots of such things about other stuff, but I'm on the edge of the birder world, so that's what I see.)  It sure makes it lots easier to get to see rarer birds than it would be.  (Though, population decreases work against that, I bet.)
Posted by Bardiac at 7:54 AM