Uphill Through the Snow Both Ways

I had dinner with some folks on the job market the other day, and naturally, talk got around to the job market.  In the course of our conversation, I got to wondering just how much worse the market is now than it was say in 2005, or in 2000, or in 1995.  I know I think it's worse, but I wonder if there's a way of thinking about how much worse?  Maybe comparisons of numbers of PhDs produced in a field vs number of jobs in the field?  That wouldn't be perfect, but it might be at least something?

I wonder if the ADE Bulletin would have that information, and might be visible over a the years to give a longer perspective?

I don't want to feel like that older person and not even be aware of it.


In line with the feeling out of touch, I was thinking about how we handle our department rejections.  I know I've asked, and our chair calls the people we had visit campus personally.  Or she says she does, and I have reason to believe she's honest about that.  But I don't know how we handle the other folks.  Do we send them a note?

I know we tend to have to wait until we've successfully made a hire to notify anyone, and that takes a long time.  The thing is, on occasion, we've had to do a second round of interviews to find someone willing to take the job we have to offer (at least in some fields), so we don't tell people we've rejected them if the job is still open.

Undine at Not of General Interest posted a link to the MLA statistics (2011-2012).
I found this graph particularly interesting: 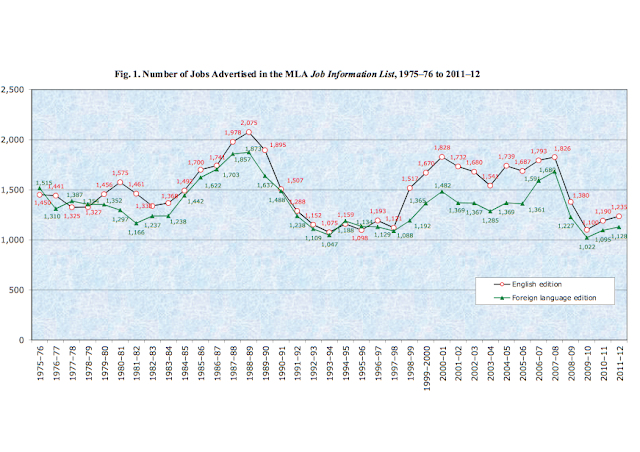 (I have to admit, I kept my mouth shut when the job seekers at dinner the other night talked about how people with tenure couldn't get jobs now, and so on.  I was right to keep my mouth shut, but I feel a little less crappy about myself now.)
Posted by Bardiac at 3:25 PM