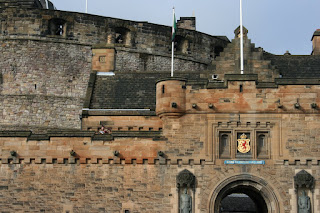 One thing about being a tourist in the UK I've learned is that most touristy stuff opens about 10 am. Some things open at 11. So you have to figure out what to do with yourself between breakfast and a tourist thing. Today, we wandered on the Royal Mile a bit, and managed to get to the castle just about the time it opened at 10 am. There was a bagpiper playing; you can see him in the picture, which I took while carefully trying to not show the massive stadium type seating that was being dismantled around the yard in front of the castle.

It was only later that night, when I turned on the TV for a little evening relaxation, that I realized the stands were for the Royal Edinburgh Military Tattoo, and then I was sad that I hadn't taken a picture. I ended up watching the whole of the Tattoo TV show; I think it was from a few nights earlier, but I'm not quite sure how things work. I don't know if they do one night, or if they do the same show for several nights, or if they have several nights with different shows. The TV station was in Gaelic, I think; at any rate, I didn't understand what was said.

Anyway, the Tattoo involves a variety of military bands, many bagpipe bands (One was from Brasil!) but some others. There was a Dutch military band that did part of their performance in WWI era uniforms on bicycles, playing and doing a sort of comedy thing (someone got a flat, someone else fell, but it was clearly planned for fun). There's this thing some of the pipe bands do, where they do a sort of slow step, and somehow, it's just beautiful. And then the night ended with the collected bands playing all together, and then marching out, finally leaving only the host band marching down the Royal Mile (yes, the very place I had walked!), playing among other things, "Scotland,the Brave." (I know, I'm ever so predictable, but I love "Scotland, the Brave.")

It was pouring rain, and yet everyone did their bit and the fireworks went off. (I couldn't help thinking about someone having to take care of wet wool uniforms. I think it was a holdover from my days in marching band.) And let me say, the castle is a heck of an impressive backdrop for military bands marching around and playing!

But that was all in my future (and a tired future it was, since I stayed up LATE watching the TV show!). 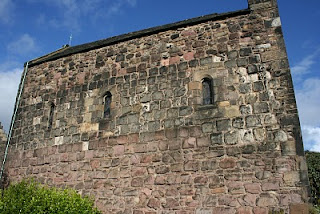 On to the castle! Weirdly, for me, but maybe because it was a bit drizzly (I know, hard to believe in Scotland!), but I didn't take a lot of pictures, not even inside. This is St. Margaret's Chapel
, the oldest building in Edinburgh. It was tiny inside, much smaller even than it looks from outside.

For some reason, since not getting to see the coronation seat at Westminster (it was out for repairs, I think), I've been totally fascinated to see the Stone of Destiny, aka the Stone of Scone (which, confusingly to me, is pronounced Scoon), and I started telling my friend about how excited I was to be seeing it (because we were headed to the part of the castle that holds the "Honours of Scotland," the crown, and other regalia, and the Stone), and she thought I was going off on some fantasy medieval Lord of the Rings sort of thing. She didn't quite believe me that yes, there was this stone, and we were going to see it. And then there it was! (You're not allowed to take pictures in the area, because of security, and I try to respect rules--no, really, I do!--so here's a link to the official site picture.)

I hadn't realized the chains were there, maybe for moving it? or chaining it somewhere? Anyway, it's a big rock, and a cool big rock.

We also saw the crown, the oldest in the UK, and the rest of the honours. There's a HUGE sword. It's easy, seeing these things, to understand how JRR Tolkein could have brought mystical, magical elements so fully into his works, since so many things and places are sort of imbued with this specialness.

I saw the room where James VI was born! (And yes, it amused me that he's totally James VI in Scotland. And during the Holyrood audio tour, when Prince Charles did a welcome thing, he was introduced as the Duke of Rothesay, and not the Prince of Wales.) I don't know why, but I got a kick out of seeing where James VI was born. I always think of him as a middle aged guy coming to England with a thick accent and lots of pals to take over the court (because that's when he has become sort of real to me), but he was a newborn. 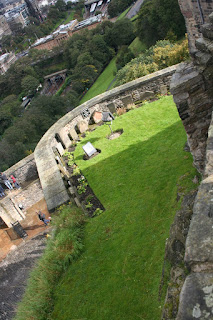 Here's a picture of the dog cemetery from when soldiers were barracked in the castle and had dogs. And buried the dogs in this little garden.

More to come, as we left the castle and went down the Royal Mile to Holyrood Palace and the Abbey ruins.

(Do you know how much more time it takes to write a blogpost if you play youtube videos of the 2010 Royal Edinburgh Tattoo? Longer than you might think!)
Posted by Bardiac at 3:45 AM