The Specialized Paper and the General Audience

I'm supposed to give a paper to the school here on Monday, after spending from Wednesday to Sunday night in Barcelona.

I have a paper ready, but need to put together some powerpoint type slides to show with it.

The problem is, the paper's about a quirky bit of The Winter's Tale, and trying to summarize the play enough to get the quirky bit understood seems daunting.  So, this woman dies, except a lot of critics think she's just been hiding out.  And this other woman has a statue made and then uses her art to bring it to life, except a lot of critics think it's fake all along, and...

Back to revising.  I'm off to Barcelona tomorrow!

But last week, I returned to Stratford-upon-Avon!  I went there before, and saw the archaeological dig, and again and saw Macbeth on the new stage.

This time, I went out to Anne Hathaway's family's home, which was late medieval, and would have been fascinating even without the Shakespeare connection.  But to think of stepping on stone floors where Shakespeare probably stepped, that was cool! 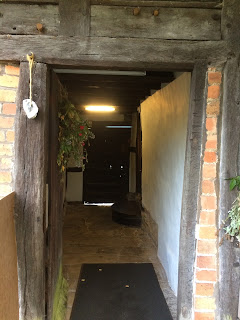 There it is, a doorway!  I think it's an addition, and the one inside is more from the period.

And, of course, I went to the Centre and New Place, too! 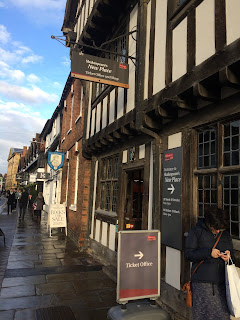 We saw Twelfth Night, evidently still in previews.  Here's the only review I see on line.  But I'm wary of any review that starts out talking about what a privilege it is to see a play.

My review: I thought the acting was good, the singing less so (Feste didn't have the voice training to really carry it off).  The costuming was interesting, as were the casting choices, but I felt like things were reinscribing Orientalism a little too strongly or without really thinking about it.  (Guess which characters whose gender is confusing and questionable were played by actors of apparent Indian/Asian descent...)

The thing is, when I teach the play, I tend to downplay the cruelty.  But in production, the cruelty really stands out to me.  And I'm increasingly uncomfortable with it.