In the Music Room with Professor Bardiac

I went in search of the music room the other day.  It must be down here: 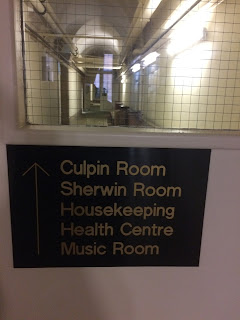 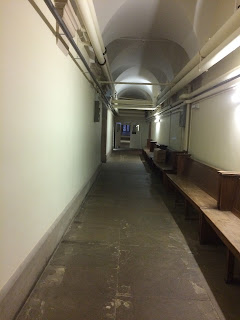 Let's go down this hallway... 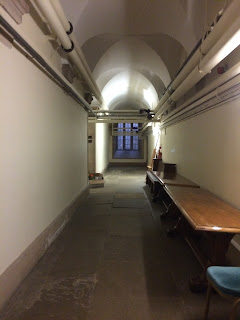 Through the doors.  Look, at the end, on the right, there's a doorway! 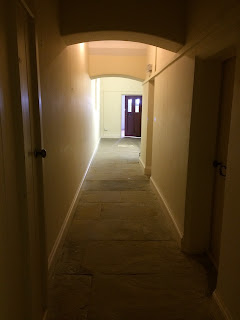 Turn the corner, and a hallway, with another doorway.  I hope there aren't any orcs down here! 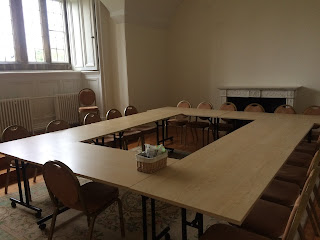 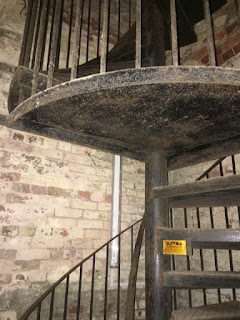 A not very secret stairway!  (It's not very secret because everyone in the Abbey knows about it.  I'm told the current music room is probably where the head Butler's office was.  He could get right up to the state rooms, to the main one, and could also see what was happening outside, in case anyone was there.)

One of the things you learn living in the Abbey like this is that there are sort of two houses.  One of the "family" house, with grand halls and grander rooms.  The other is the servant's house, with ways to get into the grand rooms that are somewhat hidden and discrete, so they could be anywhere, but not be seen by the family or guests, because at the time this house was built, that mattered a lot.

The ground floor is pretty much the domain of servants except for the grand entrance, which is a big room with a staircase.  The main staircase goes up to the next floors, and is really fancy.  The next floor up (the second floor in US parlance, and first floor in UK parlance) is grand rooms and halls, with some sort of secret doors, and a semi-hidden area with a big staircase.  It's the ground floor at the back of the house, and there's a gorgeous conservatory.  There's also a wing that's all where offices and kitchens would have been, that's off the main square of the house.

The next floor up (third in US parlance) is mostly family rooms, bedrooms and such, and a governess's room to one side.  The next two floors up are only accessible through the semi-hidden area with the big staircase, and lead up to what would have been servants' quarters.

So the house is sort of split in two.

Socially, things are very different here than when I was here before.

Then, there was one married couple with two kids, both parents faculty members teaching.  One married couple with only the male faculty member teaching.  And four female faculty folks more or less on their own (though at least two of them had long term partners who visited for a short time), and one male faculty person on his own.  And only the one couple with a "trailing spouse" was sort of older.  That meant that a lot of time three of us "single" folks did a lot of traveling and such together, and we also did stuff with the family.  Two of the "single" folks pretty much did their own thing, and the married couple did their own thing.  So it felt pretty social.  And gender balanced.

This time, there are mostly male faculty members with trailing spouses.  At least it feels that way.  There's one "older" couple, nearly retired, who seem a bit imperious.  There's a couple with four kids, and another couple with two kids, and two nearing retirement couples whose kids seem grown (and not here).  Then there are two male faculty members without family here (though one is married, but his spouse and child didn't come).  Mostly folks are nice, but the couples are doing couple things, and the families are doing family things.  (It's weird, but the couples nearing retirement seem older than I feel, but I don't think they're actually much older.)

At the one faculty meeting we had, it felt very, very old fashioned.

The new principal seems good, but very traditionally male, too.

I'm glad I've been here before so I'm pretty comfortable traveling on my own and know my way around places.