A Little Adventure before I Go

I have 8 days before I need to be on a plane to London!  I'm excited, overwhelmed, and more overwhelmed.

I've now finished all the big projects that absolutely have to be finished before I go except the whole class prep project.  There are two other projects I should also get further on.  But at least I've taken steps on one of them.

My friend, K, who's going to house sit has moved in.  So far, this arrangement is working out really well.  I hope he enjoys living in the house!  (He's a really good guy, and easy to get along with.)

I started riding my bike again this past weekend, just on a local trail.  And on Sunday, I was thinking about cutting my ride short to work on something else, so I turned off the trail onto a road in order to be able to turn around more easily, and saw a sign that pointed to a landing and said something about the joys of taking your kid fishing.  But I'd never heard of this landing, and it's only about a mile off the bike trail.  I rode up the road, which I'd thought ended at the gravel mine (visible from the trail crossing) and realized that it turned and went on from there.  What I found was a little park area, with a gravel/packed dirt and pothole parking area, a few picnic tables, and a little paved boat ramp with a sign saying that it was four something miles up river to the landing near campus, and 5 something miles down river to a landing further down.

I had a plan.  It wasn't a particularly cunning plan, but a plan.  I could put the kayak on the car with the bike inside, and drop the kayak at the landing near campus along with my life vest, paddles, and so on.  Then take the car (with the bike) to the new landing, leave the car there, and ride the bike up to the landing near campus, lock it there, get in the kayak, and go down river.  So I could do my own drop off and pick up because it's fairly close.

And that's what I did yesterday.  I was a little anxious about it, especially worried about what if I missed the landing somehow?

The thing is, right across from the landing is a ski jump, and that's visible from pretty far away, and not easy to miss, so the chances of my missing the landing and having to go another five miles were low.

The weather was good, and I told a couple friends what I was up to, and texted them before I got on the water with my eta (and then when I got out again).  But still, doing things all alone makes me a bit apprehensive.  It doesn't usually stop me doing them, but it makes me worry a bit along the way.

Here are some pictures from the adventure: 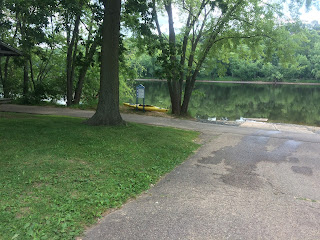 My kayak at the first landing.  (There's an ice rink right near, owned by the city and university jointly, and the city rec people were kind enough to let me leave my life vest and paddles and such there.  I used my bike lock to lock the kayak to the sign, probably illegally.  But it was out of the way at least.) 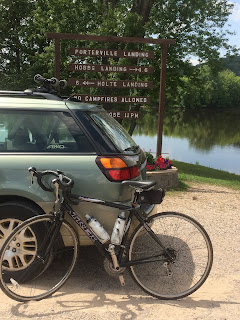 At the second landing, ready to get on the bike! 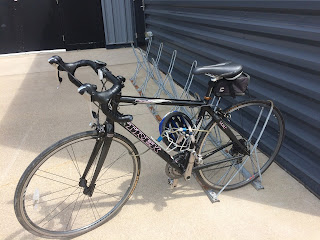 Bike parked at the ice rink, and locked up! 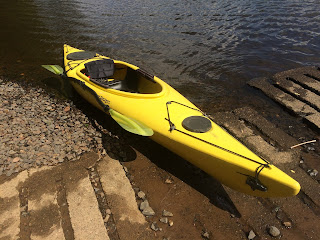 Kayak loaded and ready to go! 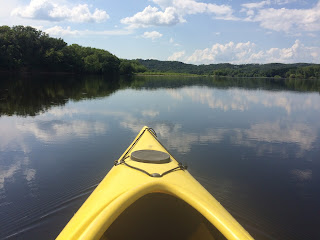 Gorgeous day on the river, mostly very quiet and calm. 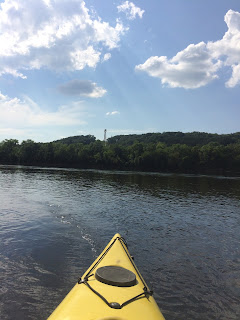 Ski jump in the distance!  (Why was I worried I'd miss that?  I blame my recent reading of The Mill on the Floss, where Maggie becomes a "fallen woman" because Stephen purposefully "misses" landing at the town where they were supposed to land, and ends up going so far that they have to be sort of rescued by a ship and spend the night on it.) 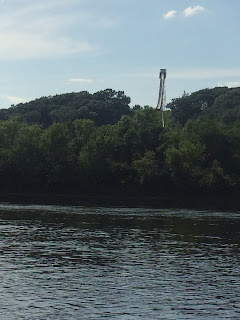 A much closer view of the ski jump.  I really don't know how anyone has the courage to slide down that and fly through the air.  But they have big competitions here during winter. 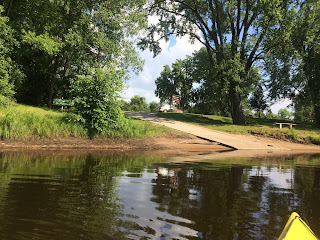 The landing (with my car parked up the hill). 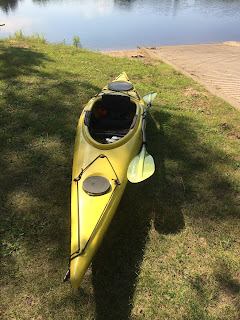 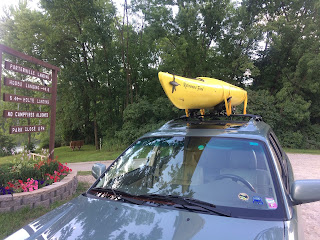 Packed and ready to go back and pick up my bike!

All in all, it was a really lovely adventure, and I'm glad I went.  I'd like to try the next leg, too, maybe next summer!