I'm sharing some pictures of the garden, but just so you remember, here's the picture I took in early June.  (I was a little late getting things in.) 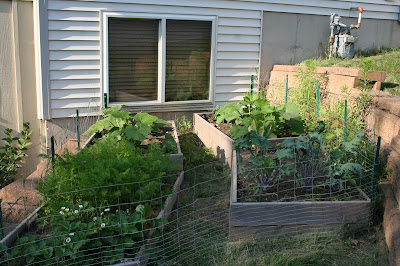 On Monday, I had two broccoli plants doing well.  On Tuesday morning, they'd both had their tops taken off and away.
I don't know quite what to do about spinach.  I had some there, and took the leaves for a while until the plants started doing the seeding thing.  So I pulled them, and then planted a couple more seeds.  (They aren't up yet.)  Anyway, things are growing and I'm happy about that.
There are also plants on the deck.  A friend told me you could put a pumpkin in a planter and then grow it up a trellis and support any pumpkins with pantyhose.  We'll see. 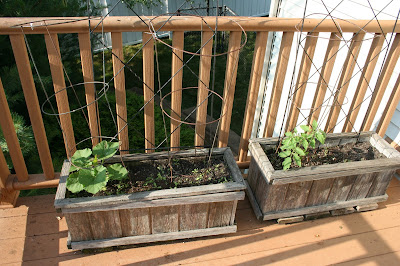 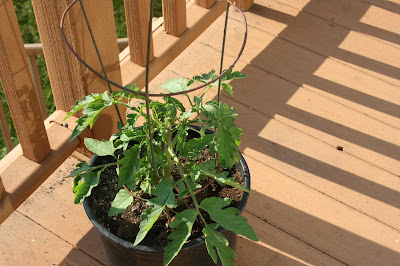 ﻿
And there are a couple of tomato plants because they're usually pretty easy to grow and success is good.

And finally, there are artichokes.  I have two plants that survived the winter, and three new ones.  And four of these are growing little chokes now!  (The two winter survivors are at the back, starting in the black pot.  Each pot except the center one has a little choke starting.) 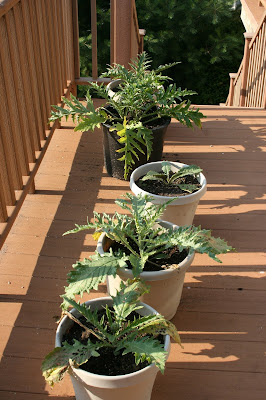 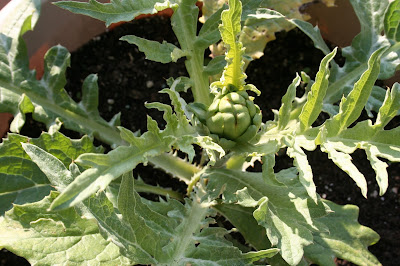