I finished packing up everything in my office, brought the last few things home, and took some goodbye pictures. 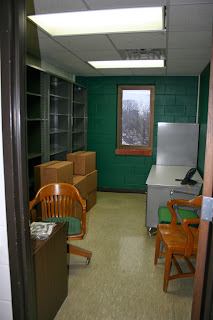 There is the green I so enjoyed!  (Here's where I tell about the mysterious painting of the green.)

And here's a link to a post with some pictures of the office full of stuff.

Only a few of my boxes are in the room.  Most are stored in our central meeting room, along with most of the other boxes from our department offices.  We had to keep the last few in our offices when that got full up. 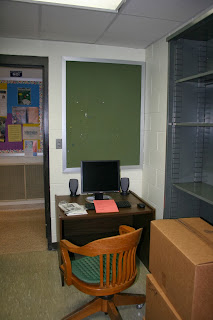 This is a view of my computer desk, which looks out into the hallway, not yet cleared (at least, not by me, since I didn't put them up).

And there's my green chair from the past.  It's surprisingly comfortable, but the wheels have been tending to come off, and each time, I practically fall.  So I'm getting a new chair with the move. 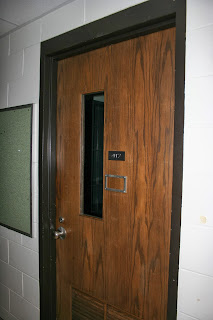 I closed the door and turned off the lights.  My door used to be covered with printed out comics, lots of them from XKCD.  Now it looks forlorn, along with the empty bulletin board next to it. 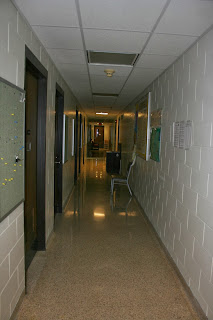 It's not alone.  Pretty much everything looks forlorn down the hallways now. 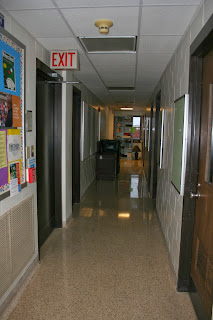 At the end of this hallway, you can see the big recycling bin they put out for our paper, which has been filled several times over.  And beyond that is a free book shelf, which has also been filled and then gleaned a couple times over.

And that's it for my time in the great Green Office.  Good times, and not so good times.  But now it's on to a new office.

When we're allowed to go, I'll try to remember to take some pictures.  At least it has wallboard and not concrete block walls!  And the halls are wide enough to pass current legal standards, so a bit wider.  They're also WAY longer, long enough to be something from a nightmare about bureaucracy in the 60s.
Posted by Bardiac at 8:34 PM