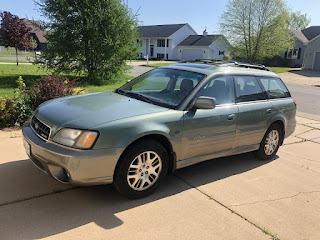 So, they called me and said they'd changed the oil, but... in addition to the oil leak, there's a coolant leak, and also, it was going to need new brakes shortly, and to fix it and all was probably going to be a lot, and much more than the car is worth.

I brought it home to think, and texted with my incredible, wonderful brother.  I texted him a link to a newer used car (same model) at the dealer, and he said it was a bit pricey, and took a look at an on line car thing, and found a really good looking car, a newer model, with low mileage, and suggested that.  The on line place delivers to your house!  (The car is fairly local, so they say.)  So I went to the dealer and test drove one like it, and then started filling out the on line forms.  And I got to the place where I needed to submit my old car's title.  But that's in my safety deposit box.

Like a lot of people, I keep somewhat important but not safety deposit important stuff in my freezer (because someone told me it's the last place that burns when the house burns).  So I looked in my freezer for the little tiny envelop with the safety deposit keys.  Not there.  (All the other expected stuff is there.)  And then I looked everywhere else I could imagine.  Nothing.  I'm guessing when I had to get a new fridge, I missed taking out the tiny envelop, and it went with the fridge, back maybe six months ago, in mid winter.  (A good time for a fridge to die, since you can move things into coolers on the deck and fill them with snow.)

I called the bank.  They need to drill out the thing... and there's a charge and they have to make an appointment and such.  So, the charge is about $125, they said, so we arranged an appointment.  The earliest is June.  Uh oh.

I sighed, and the next day texted my brother my tale of woe.  And he sensibly texted back that they weren't going to give me much for my car, so why not get the on line one with low mileage, and then just take my old one to the junk yard when I get the title.  SMART!

He looked at the on line place again, but the car he's suggested was gone, pending sale.  He looked some more, and I looked.  Then he suggested a different model, which I've never driven.

I told him I'd go test drive one at the dealer, and then texted him the link to the dealer, and asked him which used car I should ask to drive, and also, if there were some of the other model I might look at.  And by the time I got to the dealer, he'd texted me four cars, and so I started test driving.  I really didn't like the second model as much.  But I drove one of the used cars he suggested, and really liked it.  It's not as fancy a version as my old car, but has all the things I really need in terms of extras: namely, heated seats.

Reader, I married it.  Or bought it, at any rate. 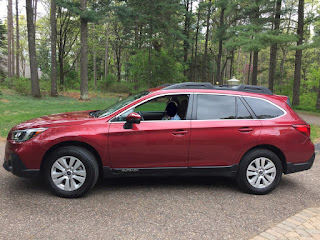 It's very comfortable to drive.

My brother also helped me figure out to get the extended warranty (mostly for electronics stuffs), and also suggested that I go get a "bra" put on.  Basically, it's plastic sheeting that they adhere to the front parts of the car to protect the paint from dings and such from stuff that gets thrown up at the car.

I had my appointment for that yesterday, and picked it up this morning.  So now it feels like it's really mine, and I've started adding stuff.  I put on things so the seat belts are more comfortable (they're always made to be comfortable for someone who's like 5'11" or something, and I'm not).  And I added a thing to hold some emergency money and a check, so they're not super visible, but are easy for me to get if I need them.  Finally, I added my park stickers for the state and county.  So now it's really feeling like we're ready to have some adventures.

My old car was really good, low worry for the most part, and good for camping and such.  If this car is as good, and lasts as long, then I'll be pretty darned happy.