Sunday's when the BL is closed, and so it's my day to play tourist for real.  I'd never been to Greenwich, and thought I'd spend half a day there, and then go birding at Regent's Park or something.  I didn't.  Greenwich filled the day!

Getting there was a bit confusing.  I looked up and saw there's a bus from Russell Square Station, but it's from the Square, not the station, and I didn't find it, and the tube was there, so off I went on the tube.  I couple changes and I was looking for the DLR, but instead there was a replacement bus, so I took that to the DLR station, and then caught another train to the Cutty Sark station.

When I got off, the Cutty Sark was right there, so in I went.  WOW!  I grew up going to the Balcutha, and this reminded me a lot of that. 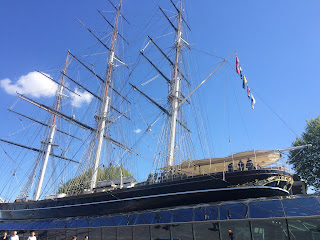 They've cut a hole into the starboard aft section of the main storage deck, and that's where you enter the ship. 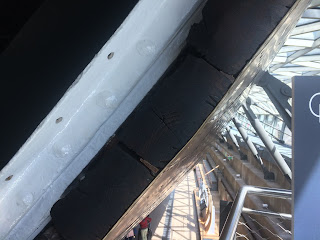 You can see how the construction works.  From inside to out: The white painted metal is original structural metal.  Then there's a layer of caulked wood planking, and on the outside is a copper-based metal cladding, which served (before it was copper, I think, but some other metal) to deter barnacles and such from growing on the side, and thus helped keep the ship faster and in less danger of problems (than was typical with unclad hulls). 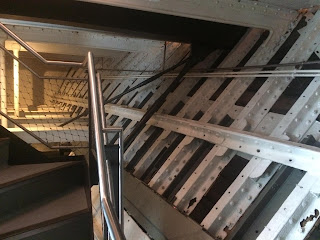 On the inside, the white painted stuff is original metal, some showing fire damage (from the 2012? fire; I can't remember the date, but it was fairly recent, while the ship was deconstructed a lot, and so the parts that had been moved weren't damaged, but the metal scaffolding inside was).  The darker grey is new structural steel support (more on that later).

The ship was built to move tea quickly during the tea trade, but the Suez Canal opened, making steam ships MUCH more practical, so it moved to the Australian wool trade and such.

Here's looking down the storage area. 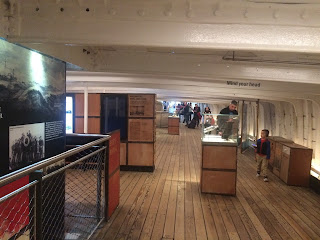 It's amazingly large!  You can see some of the displays, which were quite good, informative, and well-thought out.  You go through the main storage area, and then the "Between Decks" storage area, before climbing up to the main deck.  The complexity of the rigging ropes must have been overwhelmingly hard to learn! 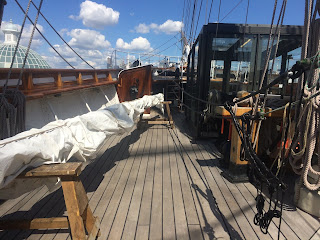 There are several "cabin" areas built on the main deck.  Here's crew quarters, with nice bunks (a bit short, but...) 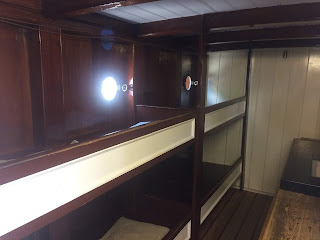 And, (if I recall correctly), the steward's area. 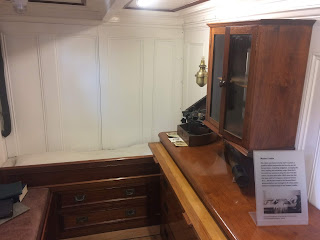 The Salon, what I think would be called a "wardroom" now, where the officers and more highly skilled crew members ate together, and where the master did chart stuffs. 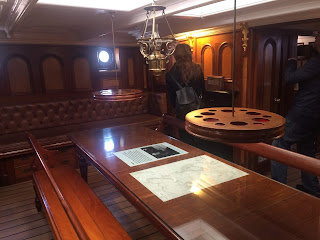 When you're finished looking inside, you exit, and can go down underneath the ship.  Remember those dark grey-painted steel structures I mentioned in the inside?  They're attached to these MASSIVE steel supports all along the outside.  So basically, the ship is supported by an interior scaffolding and hangs on that, and the scaffolding is supported from the outside.  So the hull doesn't have anything but gravity working on it, and thus isn't deformed as it would be if the whole weight were resting on it.  Someone really smart came up with this idea! 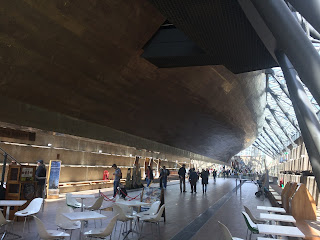 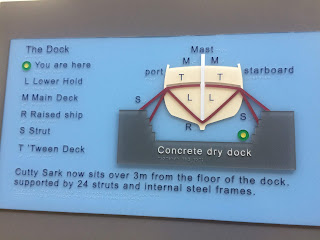 From the Cutty Sark, I walked up the hill to the park and observatory.  I didn't take as many pictures in the observatory as I sometimes do, because I was so busy looking at all the cool stuff and reading the information.  It was fascinating!

Here I am, standing over the Prime Meridian.  Somewhere, I've got a picture of me at the "Mitad del Mundo" in Ecuador, the Equator line, so this could be paired with that, eh? 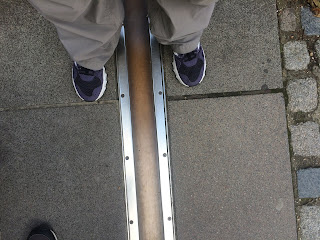 Here's inside the Royal Observatory, which was designed by Christopher Wren.  Damn, he's amazing! 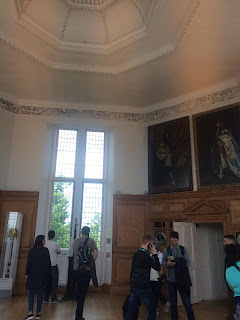 Walking down from the observatory after, this is another Wren masterpiece, The Queen's House, set against the backdrop of very modern London. 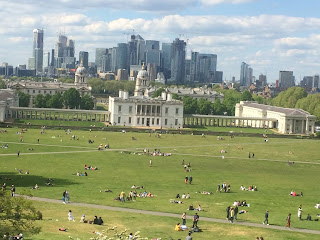 I started out of the observatory about 3:20, thinking I'd still make it to the park, but the National Maritime Museum was right there, free, and open for another hour and a half, so I had to give it a go.  I was glad I did, and could have spent a good many hours there!  Alas, I didn't have enough time, so...

I saw a picture of Sir John Hawkins, who has much to answer for in pursuing the trade in slaves from Africa to the Americas and Caribbean. 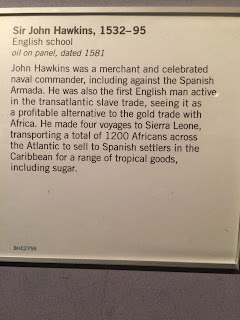 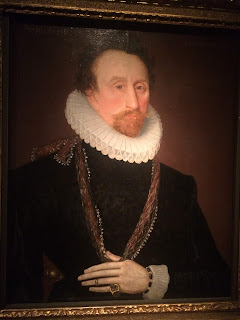 And in a different vein, here's the coat Admiral Nelson was wearing at Trafalgar, when he was hit by a bullet, making a fatal wound.  You can see the hole from the bullet, but I think the coat's been cleaned and looks to be amazingly preserved. 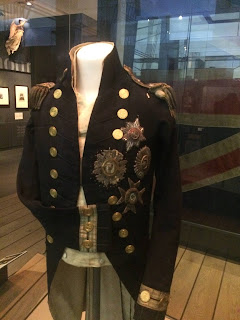 When the Maritime Museum closed, I headed back towards the DLR, but along the way, I saw a bus stop for the bus to Russell Square (I remembered the number)!  So I hopped on the bus instead.  And went to the upper floor. 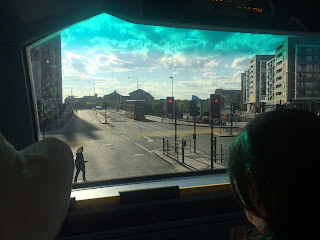 I had a pretty good view for about an hour.  Interestingly (to me, anyway), my university has a tradition of buying used London double-decker busses, so I've ridden them before, just not IN London.  But now I have.  For real.

All in all, this was a GREAT day.  If I had it to do over, I'd leave WAY earlier so I was there right when Cutty Sark opened, and then I'd have more time to see the Maritime Museum.

On Monday, I left the Library early and went to the Tate's exhibit on Van Gogh.  It was just superb.  I had the best time!  If you can get there, go!