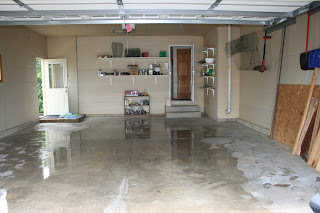 According to my fitbit thing, I walked about 8000 steps cleaning the garage today.  I mostly emptied it out, swept, then threw a couple of buckets of water down, swept more (the water helps get rid of the road salt left over.  I actually do it a couple times in winter, too, when it's dry, but not with as much water.)

I took this while the water was drying.  Once it was dry, I put the stuff back in, including my kayak and car, and now it looks less tidy than it did, but still way better than when I started.

When I was a kid, I used to hate it when my Mom would declare it time to clean the garage.  But as an adult, I get to a point where it's just time, and I just do it.  It takes a couple of hours, and then I feel way better about it.

People have parties in their garages around here, and also sometimes have TVs set up in them.  Where I'm from, I don't remember people having parties or TVs in the garage.  Do you have parties or a TV in your garage?

Other people can't park their car in theirs because there's lots of stuff.  (Often it's kids stuff; kids acquire lots of stuff to put in garages!)