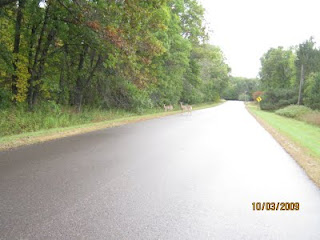 I went for a ride today between the rain (mostly, I got caught a little). Just before I got to my turn around point, I saw these two, and they saw me. Sometimes, deer just look at me as I'm biking along with this "what the hell kind of idiot contraption has that human come up with now?" look. These deer had that look, and then they took off.

Meanwhile, I had stuck my little camera in my jersey, and quickly pulled it out and turned it on, which isn't all that easy with long-fingered riding gloves and pedaling and all. So I didn't get a great picture.

And that's the metaphor of the week: it wasn't all that easy what with my hands busy and pedaling and all.

Speaking of metaphors, do you ever get the feeling that whoever first used the "capstone" metaphor for a college "finishing" type experience really didn't know what a capstone is, and maybe meant to use "keystone" but got it wrong and now we're all stuck with it? Because it's a piss-poor metaphor that doesn't work when you think it through.

I really needed that ride today, though, rain or no.

I woke up really early this morning, and sort of sat up and realized that people in my department are (overall) really demoralized, tired, and on edge. I think getting our first cut paycheck hit home, and we're getting to the grading point where we feel the extra students loaded into classes more, and the administrative demands (more assessment!) feel piled on. If we were a person, we'd be on blood-pressure stuff for sure.

I'd like one of my colleagues to quit complaining about something s/he didn't have the fortitude to object to when s/he was in a position to make a difference. I'd like another colleague to quit complaining about exactly the same thing. The thing is, both people were working on the same task, and neither had the fortitude to try to change what was heppening, and neither apparently realized that the other would have agreed.

I'd like another colleague to not be so difficult about meeting times. I don't know if this person actually cannot meet at X time, or if it would just be inconvenient.

And finally, I'd like yet another colleague to actually do the committee work s/he agreed to do.

On the other hand, I had a really fruitful talk with a student this week; the student asked for help with something, and I think I was able to help him/her, and then we found something extra cool, but only because we were looking. I think the student might follow up on the coolness, which could make for a fascinating project.

I'm so far behind in grading I want to hide, but now I have to get to it.
Posted by Bardiac at 1:46 PM