Hope for Spring: the Artichoke Saga

Back in October, I posted a couple pictures of artichoke plants I'd brought in, hoping to keep them alive for the winter.

In November, suddenly a bunch of the outer leaves died off.  I was sad, but hopeful that the rest would survive.

And then in late December, the rest of the leaves started to die off.  Happily, in early January, the friend whose expertise with plants made growing artichokes in this climate possible was by, looked at the plants, and diagnosed them with spider mites!  SPIDER MITES!  Ugh.

So, in desperation, I went to the local little hardware place and the hardware person helped me get a dormant plant spider mite insecticide, which I sprayed.  And then I waited.  And things seemed a bit better, so I waited.  After a couple of weeks, there were little leaves starting from the center again, so I cut away the deadest of the old leaves and sprayed again.  And then I waited some more.

Today, I cut away the last of the dead leaves and took a couple of pictures. 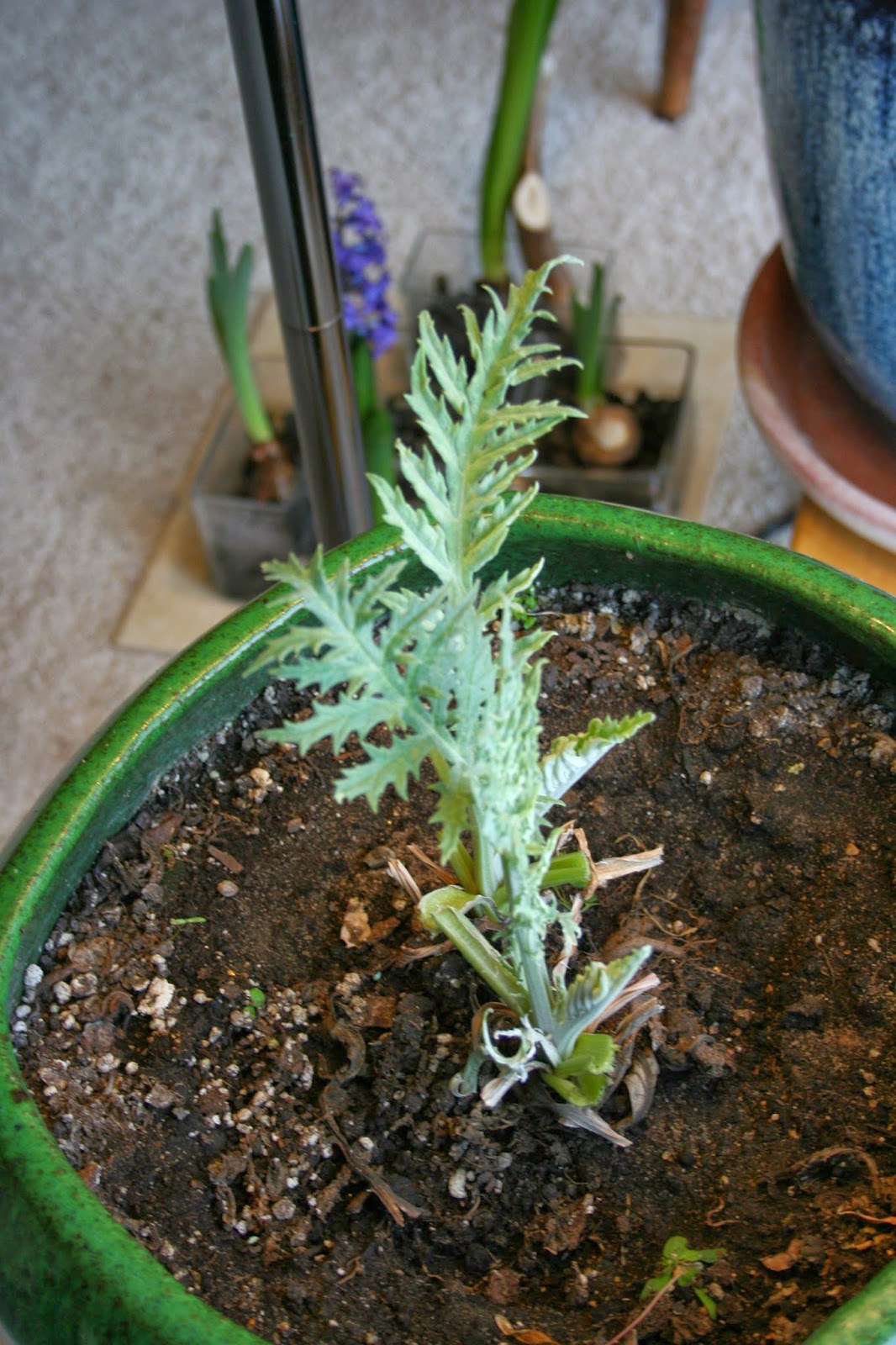 As my friend pointed out, it's a good sign that they're putting on new growth.

She also pointed out that since the other artichoke plants we've grown have been first year plants tricked into thinking they're second year plants, if these plants make it into the spring looking this good, then I'm way, way ahead of the game.

Looking at the October pictures, I realize that I didn't take a picture of the light set up.  In those, there's one bulb.  But early on, my friend suggested that one wouldn't provide enough light, so I moved a different lamp there, one of those lamps with five bulbs on sort of moveable stem things, all of which are now lined up and pointing down at the plants.  They're also right in front of a big window which does afford some natural light, though it being winter, not much. 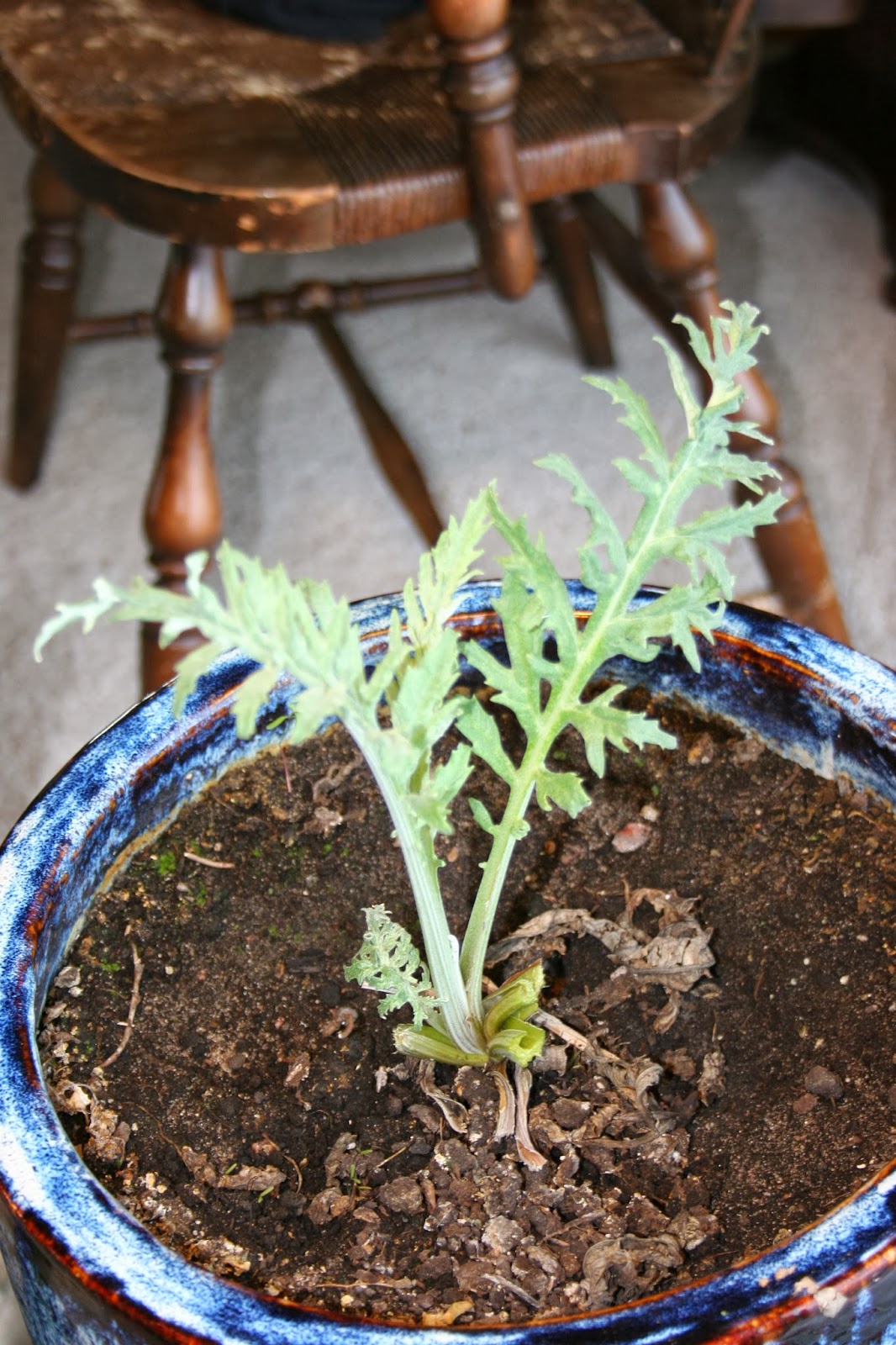 Back a couple of months ago, my neighbors were going to drop off their dog for the weekend; usually, in winter, the dog's crate goes right in front of the picture window where she can see out at the birds and the neighbors.  But because the plants are there, I asked them to put the crate in the summer spot (which is fine, but doesn't have birdTV and isn't in direct, hot sun to keep her from overheating in summer) because of the artichoke plants.  And she was so funny about asking if that was the light that's always on in that window.

Yep, I'm growing artichokes, but I think my neighbors thought I was much more interesting agriculturally.

As you can see in the background of the first picture, I've also forced a couple of bulbs.  The hyacinth did great, one is pretty much done flowering, and the other is in full bloom.

The crocus seem to have died, but the daffodils seem to be starting.  Here's the currently blooming hyacinth. 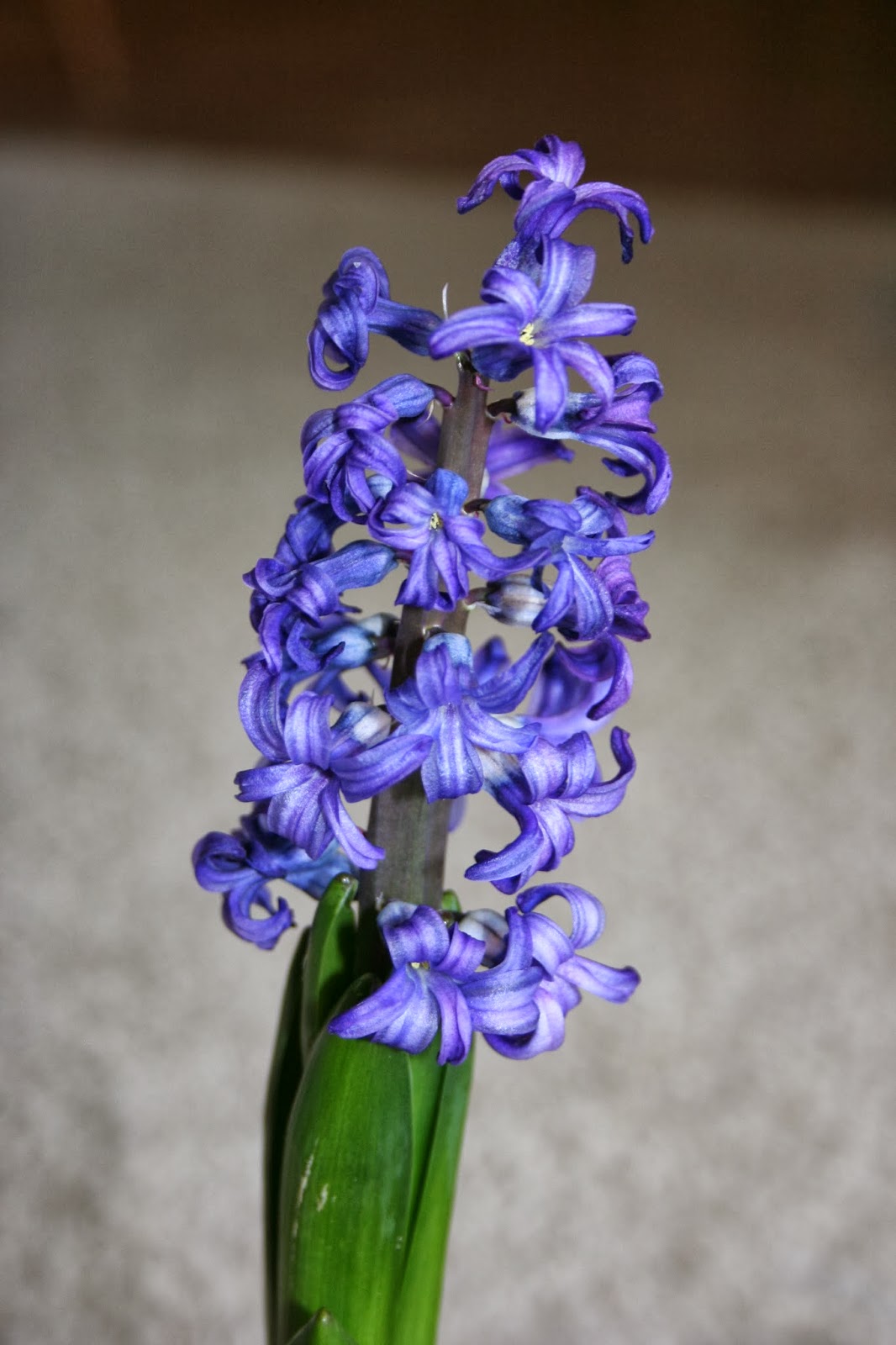 I'm at that point of winter where I can't quite believe that it will ever be warm again.  But yesterday, I went out in the afternoon (about 4pm) to try to see the local snowy owl (no luck), and realized that it was light until WAY later than it had been in January when I went out to try to see it and it was getting dark by 4:30 or so.  So there is hope, right?