You know there are whole blogs and stuff dedicated to women's shoes, right? And lots of women who blog talk about shoe shopping and stuff. So I decided to do that for a sec. (Are there blogs dedicated to men's shoes?)

Here's what the shoes typically look like on those other blogs. 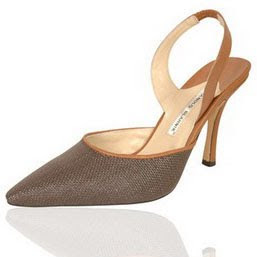 This is called a Carolyne Pump in Dark Brown by a famous designer named Manolo Blahnik. Perhaps you've heard of him?

So maybe you're the type of person who sees this and thinks, yes, that looks GREAT! I should get some!

I'm not. I look at that and think about pain, a lot of pain. First off, my feet are about a size different, so any shoe that fits my right (bigger) foot, has to have some mechanism to make it tighter or my left (smaller) foot floats around finding ways to get blisters. If you can tie the shoes, that works pretty well. Or you can put something in the shoe, but that's significantly less comfortable. (Trust me on this: stuffing something into the toe of a high heel shoe so your foot doesn't slide around does not make for happy toes.)

Second, the strap there at the back. I know that's going to wear a hole into my right heel fast, but not before my toes are all smushed and crying for freedom from the pointiness. My left toes, especially, will be crying, because everything will be pushing them forward extra hard. I have a sort of bent little left toe; it might be the only toe that doesn't actively rebel under such conditions. (Does anyone have toes THAT pointy?) And the balls of my feet will be crying along with them.

Third, you have to know I'd break my ankle and fall off the heels. Not in that order, probably. I think I'd lose all the supposed sexiness that heels supposedly give women's calves if one of mine were in a big cast.

Fourth, I've been told by my students that I can be a bit intimidating sometimes. Now imagine me four inches taller on death stilletos. I think we can all agree that's a scary thought. It could be worse than scary, though, because IF I ever made it all the way to a classroom, you know I'd fall into a student's lap when I looked down to try to take roll, and that would probably be as uncomfortable as just about anything I've done in a classroom. 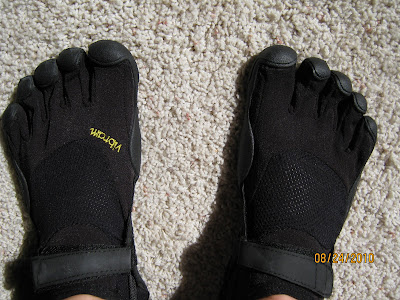 My toes do feel a little strange, all spread out. I think the only thing they have in common with the Manolos is a heel strap. And a stiff price tag--though not in the same league as the Manolos, now that I look. HOLY COW! People pay $700 for a pair of shoes????? It's a good thing I was sitting down. Who has $700 to pay for a pair of shoes?? And they don't even have steel toes to protect you from stuff falling on your feet, or lining for arctic or Everest expeditions! (Am I the last person on earth to realize that some shoes cost $700--or MORE!--and it isn't because they were custom made for an Elton John concert tour?)

My shoes do have one more thing in common with the Manolo shoes, though, a dedicated blog!
Posted by Bardiac at 1:54 PM